Algae in a jar

Algae are in the plant kingdom, but technically they are not plants. A diverse group of organisms, algae survive in even the harshest habitats. From the dry desert, to the Arctic Circle, to boiling springs, these organisms have found a way to extract enough from their environment to live. Algae range in size from microscopic to meters long and from single-celled to complex organisms that rival large plants. These organisms may look like true plants, but unlike plants, algae do not have roots or true stems and leaves.

In Florida’s freshwaters, algae are what make the water green. Green water is not necessarily undesirable, and neither are algae. In fact, algae are essential to the ecosystem and to life as we know it. Algae are a primary component of the food web, providing food for all types of animals, including fish, insects, mollusks, zooplankton (microscopic animals), and humans.

There are microscopic algae, like phytoplankton; and there are macroalgae, visible to the naked eye. Algae occur naturally in all types of systems and can indicate the condition of an ecosystem. The mere presence of a species can indicate the amount and type of nutrients present.

Some Important Types of Algae 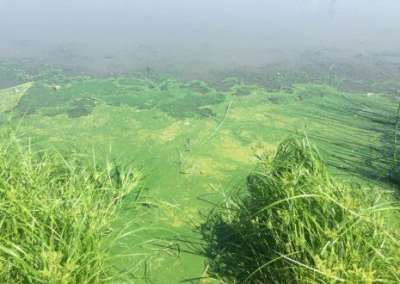 Blue-green algae is thin and stringy or a hair-like bacteria that can cause the coloration of the water to look blue, green, brown, or reddish-purple. It is buoyant and will form a “scum” layer or floating mats on water surface. It grows in lakes, ponds, reservoirs, and slow-moving streams when there is warm weather, plenty of sunlight, and an abundance of nutrients like phosphorus or nitrogen. 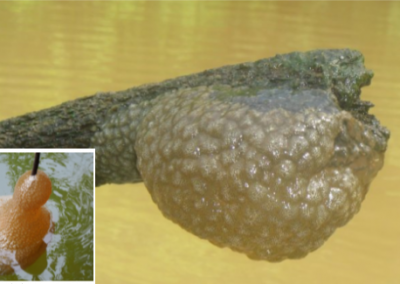 Although bryozoans are a type of small animals rather than algae, many people often confuse them with algae. Bryozoans can be found in quiet lakes, ponds, streams and swamps attached to a surface under water. Bryozoans are also a food source to fish, insects and snails. They also clean the water as they consume microorganisms. The presence of bryozoans typically indicates good water quality. 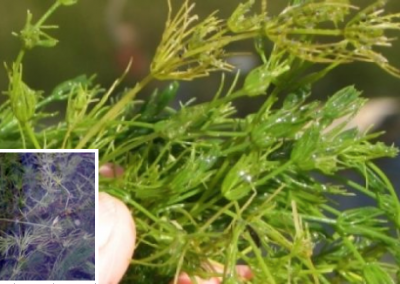 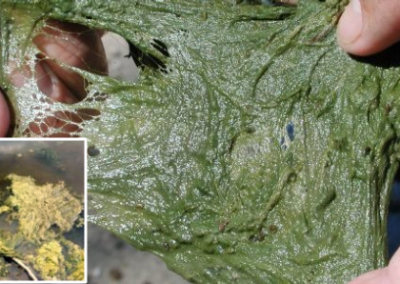 Filamentous Algae forms long visible chains that intertwine forming a mat that resembles wet wool. It starts along the bottom in shallow water or attaches to structures in the water then floats to the surface. 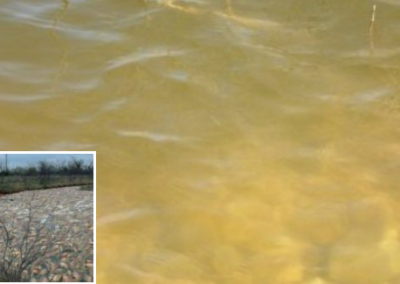 Golden algae are microscopic, about the size of a human red blood cell, and floating with an oval
shape. It often blooms in large numbers. 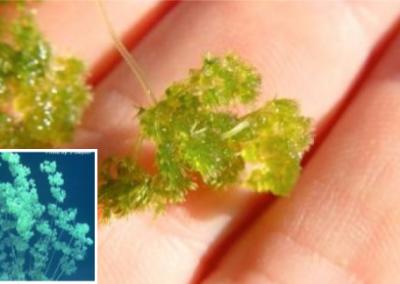 Nitella, aka stoneworts, is a branched multicellular algae that is often confused with submerged flowering plants that do not extend above the water surface. Stoneworts are light to dark green with forked, bushy branches. 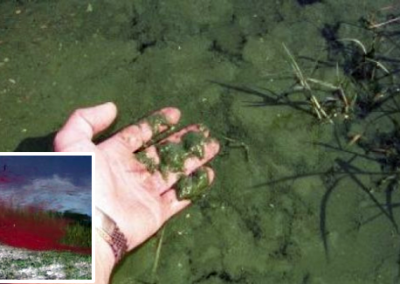 Planktonic algae are floating microscope plants. Pond water will be colored in shades of green, blue-green, brown or variations in between. 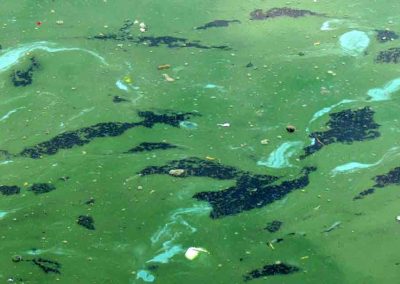 Blue-green algae that can exist in all bodies of water. Some have the ability to fix nitrogen while others produce toxins potentially harmful to humans and animals.

Some Other Important Types of Algae

Lyngbya is one group of cyanobacteria of special concern. Long and hair-like, this filamentous alga can form large benthic and surface mats (blooms). Lyngbya normally grows in dense mats at the bottoms of nutrient-enriched lakes and spring-fed systems. These mats produce gasses during photosynthesis that often cause the mats to rise to the surface. At the surface, winds pile the algal mats against shorelines or in navigation channels. These mats can be several acres in size. Studies continue on what influences the cause and duration of lyngbya blooms. In some areas, the blooms cover so much of the pre-existing vegetation that they cause serious damage and eliminate other species. In some places in Florida, lyngbya smothers eelgrass, a preferred food of the endangered West Indian manatee. Some lyngbya species in this genus have been linked to a skin irritant that causes “swimmers’ itch.”

This spherical, unicellular alga can form a colony (group of cells). A microscopic alga, microcystis will turn the water blue-green when it grows to bloom proportions. Some strains of microcystis produce a toxin known as microcystin. In abundance, this toxin is potentially harmful to animals.

Spirogyra species are mostly freshwater and are commonly found in shallow waters around the edges of lakes and in ditches. This bright green, mat-forming filamentous alga is slimy and has no branching. It is called Spirogyra because of the way the chloroplasts wind around the cell.

Cladophora species are also bright green. They are branching, and feel coarse when touched.

Hydrodictyon (also called water net) forms a net by joining five or six cylindrical cells. It can grow so large that the net can be seen by the naked eye. The best habitat is clear, eutrophic water, but the algae are also seen in irrigation ditches and even rice fields.

Diatoms are a group of algae often considered the most beautiful because of the glass-like silica shell that houses them. These “shells” come in a wide variety of shapes and sizes and some species can form long chains when linked together. Their appearance is somewhat kaleidoscopic.

Commonly called yellow-green algae, many species belonging to this group were once placed within Chlorophyta. However, the classification was changed after close observation of the type of chlorophyll and its arrangement.

Vaucheria species are filamentous, with branched cells; they grow in dense mats that look like carpets of green felt.

Charophyta species (commonly called the stoneworts) are considered an evolutionary link to higher plants. They occur in lakes, ponds, and streams attached to the bottom by rhizoids. This group is often mistaken for true plants because of the whorls of filaments at nodes along the shoot of the organism. Charophyta can form relatively large areas of dense underwater monocultures.